Friday 13, 2013. There is something about this local act of nature that feels familiar. Something about the light continuous rain, the relatively mild temperatures, and the high gray sky reminds me of the NC ocean. As it turns out, Colorado is experiencing its first tropical storm-like weather. 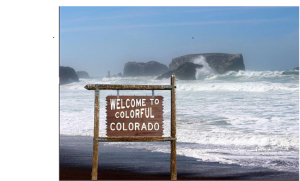 “The upper-level low responsible for this week’s Colorado flood drove a southeasterly flow of extremely moist tropical air from Mexico that pushed up against the mountains and was lifted over a stationary front draped over the mountains. As the air flowed uphill and over the front, it expanded and cooled, forcing the moisture in it to fall as rain. “http://www.wunderground.com/blog/JeffMasters/nodata

Since I moved to Colorado,  we’ve had 3 deadly floods in Northern Colorado. In 1976, a dam overflowed in Estes Park and a monster flood careened down Big Thompson Canyon, killing almost two hundred residents, campers, and one heroic state trooper. Bodies spilled out into Loveland, CO for days. Locals still talk about it.

In 1997, in Ft. Collins, a flash flood gushed over a retaining wall near the Colorado State University campus, destroying a small neighborhood and killing nine people. As one survivor said, “One moment I was watching Next Gen, and the next moment I was up to my neck in water.” Beam me up, Scottie.

Wednesday, along the Front Range, the rain began and it hasn’t stopped yet. From it’s deceptively slow beginning, the storm filled our canyons with dangerous rising water moving at white water speed. Boulder and Longmont, Lyons and Jamestown took the brunt of the storm.  Fortunately, there has been time to evacuate or warn residents. Even so, three people lost their lives. Hundreds of homes have been damaged or destroyed, roads are closed, and schools and businesses are taking an enforced day off. Our main highway, I25, is closed from the southern  border of Wyoming to Erie, CO. And, as the water flows, there is more to come.

There you have it. It’s official. Mother Nature is still in charge.

When was the last time Mother Nature took charge of your life?

(BTW, if this was January, three days of similar rain patterns could result in 8 feet of snow.)